Happy New Year to you all, and a massive thanks to all the comedians, charities, audience members and staff at the Brighton Komedia and Just the Tonic, who have made this year such a success. Thanks to Ed Moore for tirelessly turning up and taking some of the best photos in the business – most of these are his, below. And thanks to some of the agents who have helped us out, particularly Paul at Glorious Management and Mick at Mick Perrin Worldwide.

Check out the photos in our gallery – there’s some awesome shots.

And now – everyone loves lists right? – to some of Charity Chuckle’s favourite bits of 2014:

1. Al Murray popping in with a tight five and all of us at the back being so excited we could shit – he was brilliant.

2. Pulling a bull photobomb at Stewart Lee and Julie Jepson and making them giggle like children.

3. Stewart Lee doing 55 minutes of jaw-droppingly good new material. My favourite bit was the one that caused a collective gasp from the Brighton PC brigade, and the way that he addressed it. Hysterical. Buy his DVD here, on Amazon, and have a good gasp again: www.amazon.co.uk/Stewart-Lees-Comedy-Vehicle-DVD/

(It was a real thrill to be able to benefit the Brighton charity, Foodshare, with this gig: they are a food redistribution service, supplying foodbanks and charities, but they are so small that they couldn’t help to make up the audience numbers, so this sure fire sell-out gig was especially for them.)

4. Joe Wilkinson’s new 10, comprising 7 and a half minutes of him wandering round the stage.

5. Scoring Spencer Jones from the Edinburgh Fringe, and watching as the Komedia bar staff wet themselves laughing as never before. 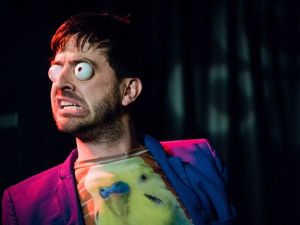 6. In February, selling out our first show of the year with Junior Simpson and then following it with another sell-out in March with Stephen Carlin, and April with Nick Helm. Magic! 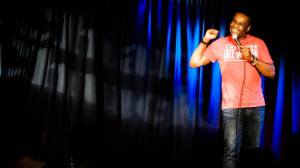 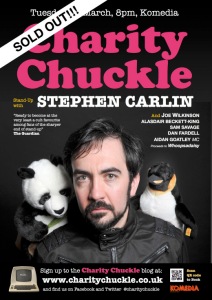 8. Jo Neary‘s swinger in May, and with the Gladrags dressing up box in November – she’s so inventive and hilarious, it’s never less than a delight.

9. Zoe Lyons’ sofa story at Christmas. And the photo she sent me afterwards. 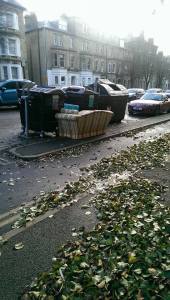 10. In Edinburgh: hanging out with Miss Behave on the sleeper; Sara Pascoe’s new toilet ramblings (don’t wee on the seat, girls); Barbara Nice crowdsurfing the nurses; Luisa Omielan and the 14 year old boy; BOBBY MAIR; Chris Boyd’s A-game; Kerry Herbert rehearsing for 4 hours to do 5 minutes – her first gig in a year; and, Jim Holland taking his shoes off onstage to put on his tap shoes and Seann and Romesh weeping with laughter at the back, big fat tears rolling down Seann’s face.

Happy New Year and see you next time!

Charity ChuckleDecember 7, 2016
Stand Up to End Violence against Women with BRIDGET CHRISTIE.